Trekking in the Himalayas – Supriya Kannan

Snow capped mountains, lush green grass, wee little lambs. I had read about these when I was five years old  in  the book Heidi. I just imagined myself in the snow, making snowmen, having so much fun out in the mountains! But, it was just a dream. A few years later, I just let go of that funny little dream and finally the opportunity did come! One really normal day, my mother asked me a question. ‘Do you want to go to this trek in Himachal Pradesh?’ I was not so interested at that point of time but I kept on asking her about what would be there, what we could do there, what temperature would it be up there and so on. I was getting a bit interested after she had shown me the schedule of the places we would be going to but I just got shocked when she said that she will not be coming to the trek! I was scared but still wanted to take decisions on my own. Finally after a while I  said yes and decided to go to the trek.

View of the clouds from the plane

On the day when we started the trek, we were all getting really nervous. when we started it felt pretty easy but since it was the slope and high altitude, it started feeling much more difficult so we took rest in between for a while. On the first day of the trek, when we were first pitching our tents, all we wanted to do was go into our tents and snuggle into our sleeping bags!  We used to start early in the morning and we would walk 6-7 kilometers a day to reach our destination by afternoon. Then we would pitch out tents and settle down and admire the panoramic view of the snow capped mountains around us. In the evening we would make our own bonfire to keep ourselves warm. 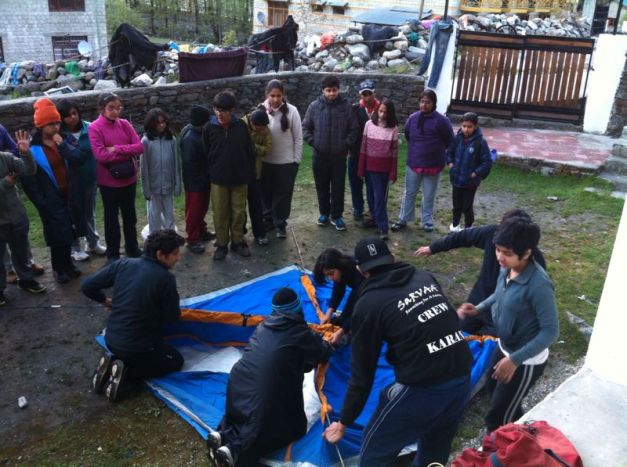 How to pitch a tent ?

One incident that happened in the hotel was that there was a scorpion in our bed! The scorpion was really close to us and i thought it had bit me. Manohar uncle and his crew came with a knife and a lemon squeezer and many more terrifying things with them. On closer examination it was found that  a thorn that had pricked me.  Thank goodness! They took the thorn out  and it did  hurt a lot. 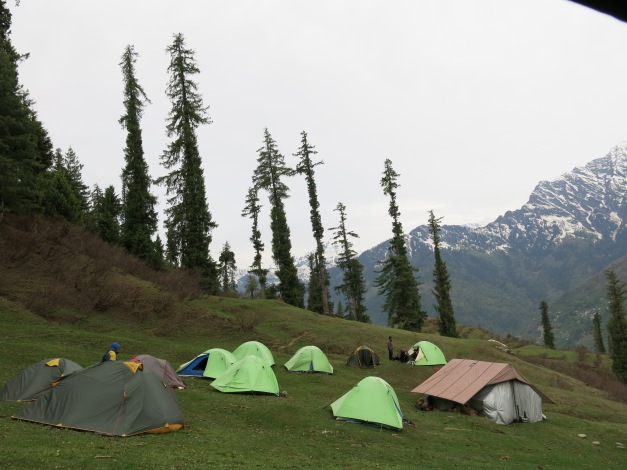 7 days in the wild

The best thing I liked about the trek were the people around me. They were really nice and kind. I could tell them anything I want whenever I would want. Manohar uncle would wake us up with tea saying, “Chidiya! gudiya! utho! chai peelo!”  and in the night he would come to our tents to give us hot chocolate. 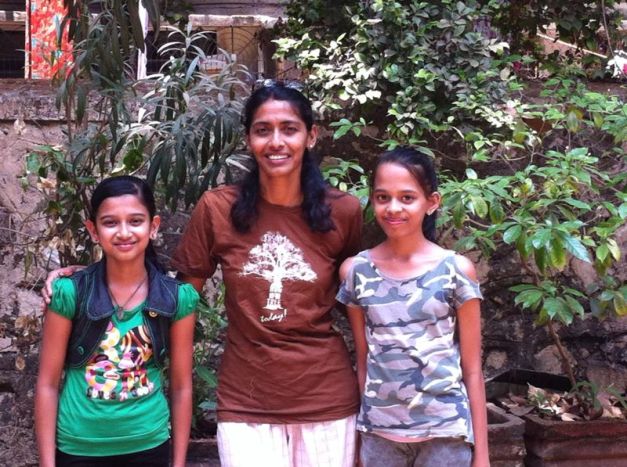 Priya aunty would help us whenever possible whatever the matter was and was really kind to us. Kavya, one of the trekkers, made us feel that she was a family member  and we could tell her anything. Zohra was a really great leader. She would always be busy with her plans and would  really take care of us. 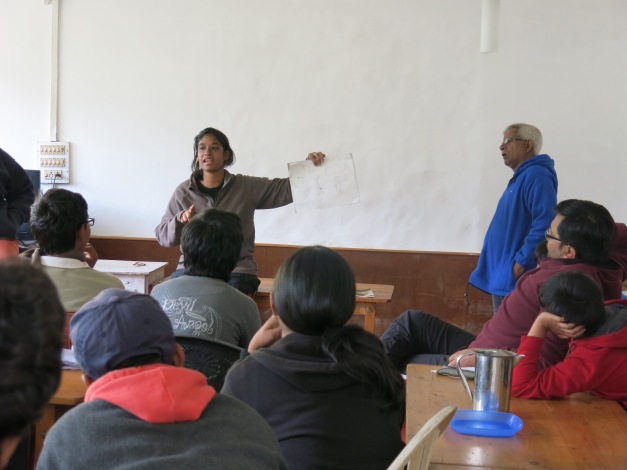 Radha aunty had given us a speech about the ‘Women of the Mahabharata’ which  was very interesting. There was another speech by Bhavana about Tigers. In her talk she mentioned that poachers  kill tigers to make money. She told us a lot on tiger conservation. Then Radha aunty told that even the ‘Kshatriyas’ would take the tigers skin and put it on their walls to show their bravery and manliness which sounded so absurd.  These speeches made the trek much more interesting and we did learn quite a bit. 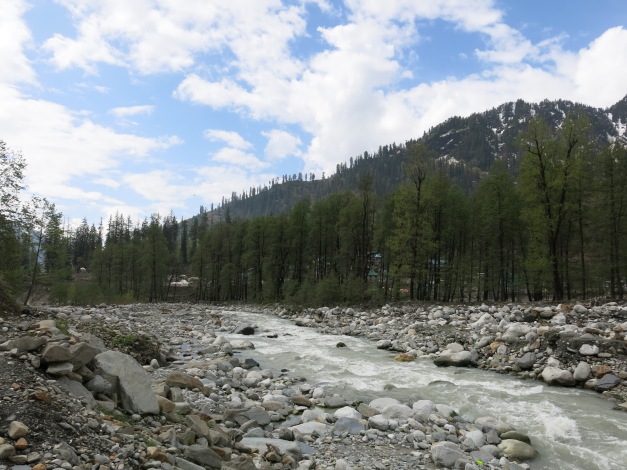 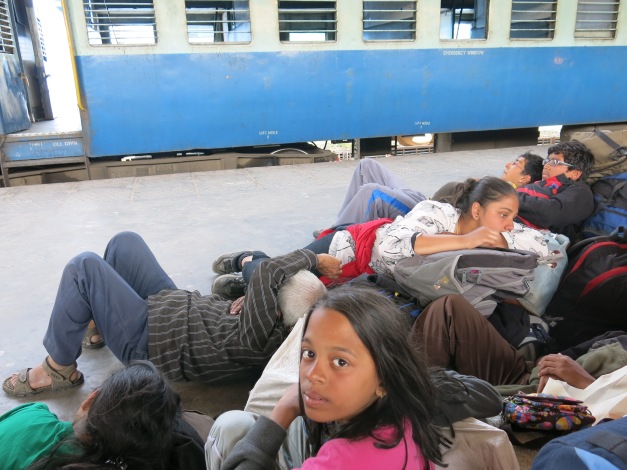 This was my first trip with a group of new people, initially we were hesitant to talk and as the days passed by we  became friends. On the last day at the railway station  everybody in the group was crying and hugging each other, including me. I miss everybody in the group and the hot chocolate in the night and the special ginger tea in the morning.

During our trip to the Laata village during our Nanda Devi trail , we happened to have a closer look at the lifestyle of the people too. As we trekked up to the summer village of  Laata we encountered  women who were trekking  down with a huge load on their back.  We learnt that these women trek about 14 kilometers in all to wash their clothes in the river down the valley . The mountain stream up in the village is just enough for cooking and other basic uses.

When people struggle so much to get water should we not be more careful in spending water?

Have a look at some links which I have compiled which gives a fairly good idea of how every drop counts.

22 lakh people in Bangalore are currently suffering from water scarcity. If we collected all of the water that is being wasted down stormwater drains, and if we treated our sewage water, we could serve the water needs of 53% of Bangalore’s population. Ref – Indianwater portal

Children’s Movement for Civic Awareness (CMCA) got kids excited about water – its importance to life, designing a simple water harvesting solution, recycling water from our washing and flushes for reuse, conserving lakes and a whole lot of life lessons around the life-giving resource!

The ecosystems play an essential role in enhancing food security. Ecosystems supply the fundamental foundation of life support, by providing ecosystem services that enable us to produce or utilize food and water. They also provide clean air and climate regulation, shelter and medicines, cultural and aesthetic well being, and can have a vital role in disaster risk reduction. These ecosystem services are however under increasing pressure and threat of further degradation. Ref : WOTR’s Position Paper on “Biodiversity and adaptation to climate change” released on October 16, 2012 at the COP-11 in Hyderabad

Climate change will make monsoons unpredictable. As a result, rain-fed wheat cultivation in South Asia as well as in India will suffer in a big way. Total cereal production will go down. The crop yield per hectare will be hit badly, causing food insecurity and loss of livelihood. The rising levels of the sea in the coastal areas will damage nursery areas for fisheries, causing coastal erosion and flooding. Agricultural land will shrink and the available land may not remain suitable for the present crops for too long. Farmers have to explore options of changing crops suitable to weather. Impact of climate change on food security in India – A paper published in the journal Advances in Asian Social Science

Catch Every Drop is the beginning of a movement aimed at sustainable water conservation, harvesting and recharge in and by Bangalore city.