A drive in the monsoons

Driving through the winding roads engulfed in mist and clouds in the Western Ghats, with countless waterfalls emanating from the hills was quite a memorable experience. The picture postcard scenery was an eclectic mix of green meadows over the hills, valleys, and the monsoon clouds which promised more rain.

After a few hours of driving in the gentle drizzle, we finally reached our destination in Chikmaglur and were in for a surprise as our hosts brought out trays of piping hot samosas. Sitting in the verandah overlooking the coffee estate embedded with pepper vines clambering over the huge silver oak trees with occasional wild creepers and ferns, we felt like we were in paradise. As the rain settled down, I chose to walk along the stream within the estate. The sound of flowing water soothed my soul . The monsoon had indeed cast its spell on me.

The birds chirping around added magic to the atmosphere. A purple sunbird soaked in the rain, was playing with the rain drops on a copper pod tree .It was delightful to watch the antics of this beautiful bird.
I wanted my family to experience this and so went back to get them. We set out down the path and settled near the stream. The kids enjoyed the place. Throwing a pebble in water and watching the ripples disappear was the one activity that they did not tire of. Collecting shells and playing with water kept us all occupied for quite a while. The gurgling stream and the wind chime swaying in the air had the effect of a delightful lullaby and we lost ourselves in the atmosphere. 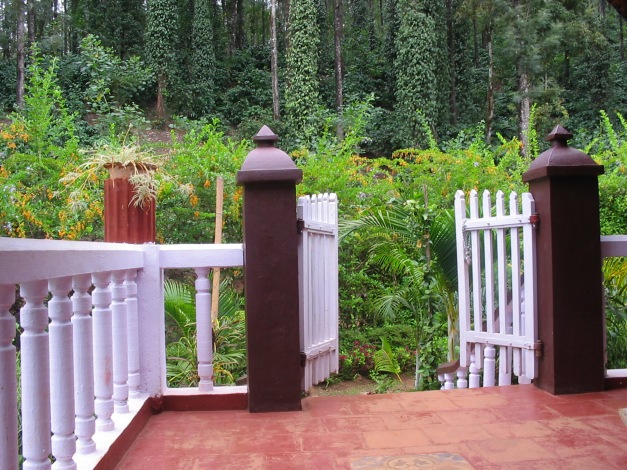 The next day we chose to trek around the coffee estate. Did you know that Coffee was introduced to India by Saint Baba Budan? It all began with a handful of coffee beans from Mocha in Yemen, and he planted them in the hills around Chikmagalur. The Baba Budan hills are now vibrant with lush coffee plantations.

Coming back to our holiday, we realized that one should not miss the safari ride into the Bhadra wildlife sanctuary. It was the lure of a tiger sighting that had us all excited but the sanctuary is home to a large variety of flora and fauna and it is regarded as one of the best Wildlife Sanctuaries in India. The lush vegetation and lofty hill ranges are a beautiful spectacle. A peafowl perched on a tree was enjoying the rain.
The raindrops on its feathers resembled sparkly shiny diamonds. There is so much more to this beautiful bird. It is so beautiful that Lord Krishna chose its feather to adorn his crown. Similarly, the Mauryan dynasty founded by Chandra Gupta Maurya was named after the peacock and it went on to become their emblem and then of course there is world famous peacock throne of Shah Jahan that had two peacocks facing each other.
A sound at a distance suddenly brought me back to our safari. We sighted the Malabar giant squirrel, gaur, some sambar deer and elephants. During the course we also saw the big teak tree called Jagara Giant with a girth of 5.21 mts and aged about 300 years and it was one of the attractions of the sanctuary.
Later in the day we set out to catch the sunset from a viewpoint nearby the reserve. The panoramic view of the sunset was indeed awesome. The sun displaying various shades of red shimmered in its glory before it finally disappeared behind the surrounding hills. I was at a loss of words to explain what I witnessed. As John Muir quotes “Keep close to Nature’s heart and break clear away, once in a while, and climb a mountain or spend a week in the woods. Wash your spirit clean.”
It was time to bid adieu to this magical place. But not before promising myself that I will come back again to listen to the sounds of the wild, the whispering wind and the gurgling stream and another tryst with the monsoons. 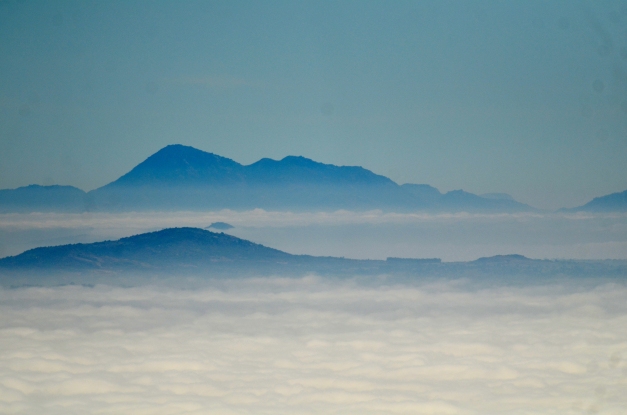 The scenery is splendid . It is indeed mesmerizing to  drive through a forest  where the  mist accentuates  the landscape and feeling  the crisp clean air where only the calls of the cicadas are  heard. Tipu aptly named his summer palace on these  hills as Heaven’s envy – Tashk-e-Jannat.

The path covered by huge trees and the wild growth of shrubs and creepers form a lovely canopy. I start looking for the birds on the trees. When I sense some movement along the path I find a stunning bird hopping  around. I learn from my fellow birders that it is the Indian blue robin. This bird keeps us engaged for sometime and disappears in the bushes.

We reach an avenue of fruit trees where a flock of oriental white eyes are  feeding on the fruits. It feels great to be in the company of avid birders, each one of us start spotting flycatchers, pipits and warblers as the mist clears up and the sun shows up finally. The sun’s rays sieve through the clouds to form  a  stunning visual treat.

We see the mystical paradise flycatcher flying around. It teases us by playing hide and seek among the canopy of the trees. The long tail undulates and adds magic to its flight. I am fascinated by the immaculate  white feathers of this beauty. We follow it for sometime and then settle down to have breakfast giving some respite to our camera when the coveted paradise flycatcher pair appear again. The nursery area has a lot of flowering plants which attracts a lot of butterflies too. A courting yellow pansy pair attracts our attention when another butterfly tries to chase it away. The kids start playing in the garden running around and looking around for interesting sightings. A spider trapping a dragonfly captures their attention. When the sound of the Malabar whistling thrush resonates in the air every one in the group follow their instincts to spot the bird. The whistle is interrupted by another lilting song of the Tickells blue flycatcher.

We visit the Yoga Nandeeshwara temple built by the Cholas. From here one gets to see the stunning views of the neighboring hills, valleys and villages. By noon the number of visitors start swelling up and the hawkers have a good time feeding the hungry visitors. From here one gets to see raptors soaring in the sky as the temperature goes up. We explore  the remains of the fort and the famous “Tippu drop”, a 600 meter cliff with a huge rock landing after the drop. Prisoners and convicts during Tippu’s reign were pushed off this cliff. A good way to have a check on law and order!

Finally having spent a day packed with priceless moments we wind up with our minds refreshed  and hoping  to travel more with a good company  of friends.

On the way down, one of us spot  a large bird of prey sitting on a branch. My heart misses a few beats when I realize that it is the majestic Changeable hawk eagle. We could see fresh blood on it’s claws. The majesty of the bird is captivating. It is  a fitting end to a wonderful trip to Nandi Hills!

Reaching there : Nandi Hills or Nandidurg or Nandi Betta is an ancient hill fortress of situated in the Chikkaballapur district of Karnataka. This is a group of hills that lies at an average elevation of about 1,478 meters (4,851 feet) above the sea level, at a distance of about 65 km from Bangalore, on the way to Hyderabad National Highway (NH7). This place can be easily reached as it is linked by roads with Bangalore and Chikkaballapur (24 km). The Hills is open to public from 6 AM to 10 PM.